Are You Prepared For Inevitable Career Uncertainty? 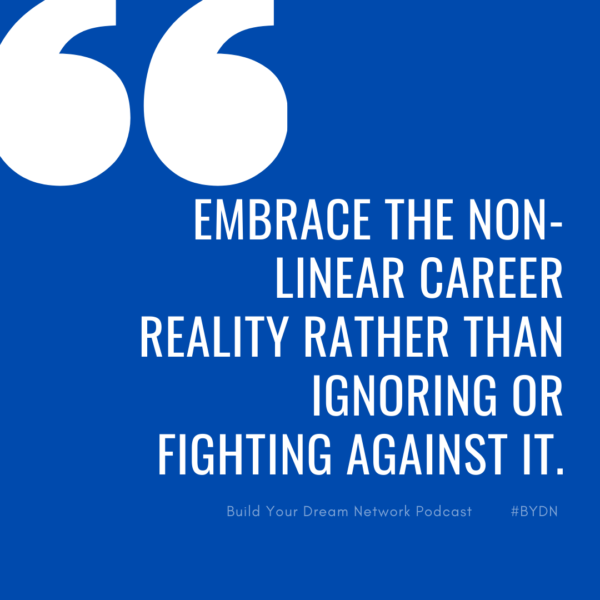 Uncertainty, and the readiness for it (or lack of preparedness when the unexpected unceremoniously drops in your lap), ah! I know, it’s a rather ominous headline but no, I’ve not been influenced by the spread of the coronavirus, rather, I’m reflected on the zigs, zags, and topsy-turvy reality of my own career. I had the chance to muse on this in response to a listener question on the podcast.

It also caused me to think…I got this illustration wrong:

Even when my own career appeared to be smoothly ticking along up the law firm ladder, it wasn’t a straight path to finding a practice area I loved. Initially it was choppy. I was an associate who needed more billable hours so I was tossed onto an emergency bankruptcy filing for a large real estate developer. I didn’t know the first thing about corporate bankruptcy proceedings and quite frankly, it had never crossed my mind to consider this area of law as a niche to pursue. Over a weekend working around the clock in the office I seemingly fell upon the career place I was supposed to be. I was assigned to work on the case because I was the ‘available’ associate, I stayed in that area of law because I dug in to learn the new materials, discovering along the way that I really enjoyed  it. It wasn’t career magic, it was a combination of necessity infused with big dose of curiosity.

My BYDN career tip: Prepare for career curveballs and winding career paths by being open to attaining new skills or knowledge (along with building connections) as your career will zig and zig, even when you perceive it is progressing along a straight line.

“Mine is an ongoing story of community-fueled reinvention, of being able to take career steps forward by stepping backward (or, more of- ten than not, sideways) and continually tapping into my connections for feedback and guidance.”

from page 64 of Build Your Dream Network