A Little Before Breakfast Networking 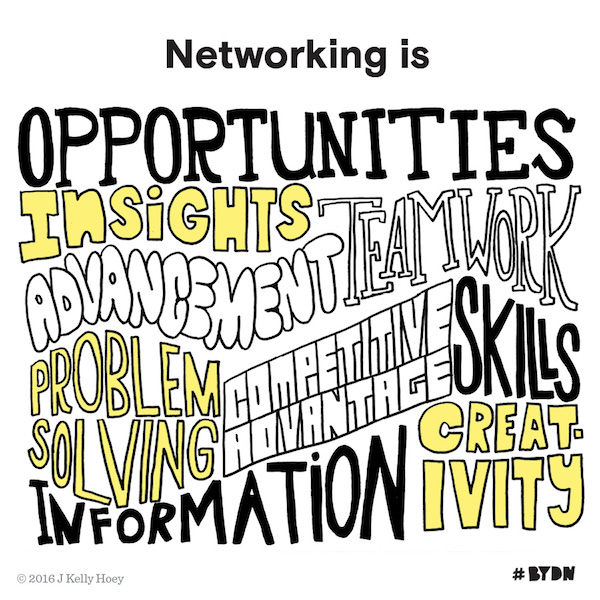 Yes, I do want you to commit some random acts of networking today (and everyday actually).

That is, realize your “random” daily acts – you know, sending email, ordering coffee, firing off an invoice or tweet – could randomly, delightfully lead to networking serendipity.

Best selling author and popular podcast host, Laura Vanderkam is a fan of this time saving approach to networking too. Tips from Build Your Dream Network are being highlighted on her Before Breakfast podcast this week.

Now, I was challenged on Twitter when I shared the first Before Breakfast podcast episode featuring BYDN tips.

Is it networking or personal branding??? You’re discouraging people from getting off their devices to meet people!

There is a fine line between networking and personal branding in a hyper-connected world. I mean, if your emails are aggressive, voicemails bothersome and follow-up sucks, do I (or anyone for that matter) want to meet you IRL? A choice font on a website and fancy logo is of little regard if the service doesn’t match the style. Rather than creating distinctions between the two, ask yourself: what does my community say about my brand? “Community” is a nice way of saying “network”. You could also say “customer” or “audience”, you know the people you interact or build relationship or network with.

Think about this scenario. The emails, calls and invoices you send to a client could be the opening to being referred more work …or not. As a customer, would I want to entertain the thought of meeting in-person with a vendor after streams of email marketing or annoying billing reminders? Not likely.

Add the little things you do daily in your profession or business – the stuff you have slotted under “admin” or “tasks” and move them over into the “networking” column – then be a little more intentional when you undertake them.

[Note: the second BYDN tip shared on Before Breakfast was “should you join a networking group?” and the third tip was “creating online water cooler moments“. ]

For those who have read Build Your Dream Network, you’ll recall (I hope) my interview with independent filmmaker Elena Rossini (in Chapter 5 #Networking at page 146). Elena was recently in New York City, so I dragged her into the podcast studio for a catch-up interview. She’s a pro at using Twitter as a source for new business. She’s also a pro at taking leave of Twitter for a month – with no repercussions. Nope. Didn’t lose all her followers or return to angry mobs. And she’s added Giphy to her networking repertoire. You read that right. Giphy. Gifs. Digital stickers. Add those to the list of things that are networking.

Find my conversation with Elena here on iTunes. And if you like what you hear, please take a moment to rate and review the podcast.