From My Build Your Dream Network: Master at turning “wild” ideas into new realities — showing the…

Home » BLOG » Business strategy » From My Build Your Dream Network: Master at turning “wild” ideas into new realities — showing the…

Number 10 in a series of mentorship stories I’m sharing this year. Mentors in my network who have helped me. And not only am I sharing takeaways that hopefully will be useful in your endeavors, as these mentors are also authors, I’m randomly giving away copies of their book (so read on!). IF you’ve missed the mentor stories I’ve previously shared — WHERE have you been! Check out the past stories and on-going #BYDN book giveaways over on buildyourdreamnetwork.com.

This is one of those stories where so many paths delightfully converge.

And it begins in Canada with Tara Hunt. Tara introduced me to her mentor Nilofer back in 2011/2012 when I was focused on the startup accelerator Women Innovate Mobile. Nilofer and I met IRL in Silicon Valley. It was gloriously sunny and warm and we sat outside. Nilofer was confidently attired in a white pant suit. I regretted succumbing to startup attire (jeans). Nilofer signed on as a mentor for the mobile accelerator and immediately — as in we had not left the our initial meeting — introduced me to amazing tech insiders in her network who would also become instrumental mentors to the startups in the program.

When the accelerator was shelved in 2014, Nilofer was there a role model and mentor on how to pick yourself up, reinvent, and pursue bigger ideas and horizons. My habit of taking head-clearing, idea generating long walks might have started around this time too….

Fast forward to 2017 and the publication of Nilofer’s third book, The Power Of Onlyness: Make Your Wild Ideas Mighty Enough to Dent the World…as I eagerly dived into her book, I find (to my absolute delight) at the start of Chapter 2 (page 23 to be exact), Kimberly Bryant’s story. Kimberly (founder of Black Girls Code) and I met on the fateful UnGrounded flight, the same time I met the formidable Dr Sue Black. I love how Nilofer shares Kim’s story as a ‘claiming it’ teaching moment. From page 32 of Onlyness: “What did you say no (or yes) to, whom did you decide to support or reject, and what did you decide to persist with, despite pressures to stop?”

Hmmm. Own it. Claim it. Who knows what awaits you when you finally do.

One, And Pretty Much Networking Done 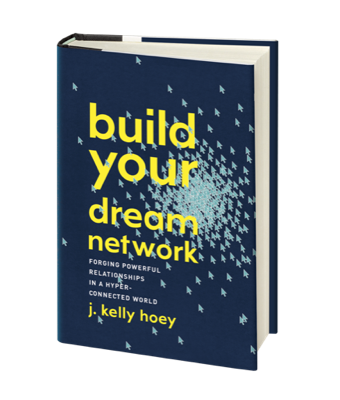 Build Your Dream With A Free Keynote or Networking Strategy Session

Five Book Recommendations (and How You Can Win Them)