Networking, we know it’s important, but do we really know what it is and how to do it? Whether your networking skills need a little fine-tuning, or a major overhaul, this is the show to help you sharpen your networking proficiency.

Kelly Hoey is author of the bestselling book, Build Your Dream Network. Lauded by Forbes as One of Five Women Changing the World of VC & Entrepreneurship and Fast Company as one of the 25 Smartest Women on Twitter. In this episode, Kelly shares how small adjustments to your daily routine, generosity, and goal-focused efforts are all it takes to ignite powerful connections that lead to major opportunities and success. We’ll gain insight into her surprisingly simple secret to cutting through networking noise while building the powerful, real-life relationships we need to succeed in our digital world.

Kelly refers to her childhood as an “unremarkable, vanilla upbringing” in British Columbia as the child of a veterinarian and a teacher. Following the rules led to a narrow vision of her prospect for life, which led to law school. It was only when she broke away from the mold and moved around to other places, that she was able to gain a different vision and perspective for her life. (Hint: It’s turned out to be ANYTHING BUT vanilla!)

“Care About What You Care About”

Building a personality brand isn’t something you “set out” to do, but it happens along the way as you add value to the people who are watching you. Your brand, reputation, networks, and expertise all swirl together to create your personality brand. Kelly says, “Your brand is what your network says it is!” When you focus on giving advice that you live and breathe every day, then you can give people what they need to replicate your success. Ask yourself these questions: how you are living your life, engaging with people, and helping others achieve success?

Who Waves Back at You?

Kelly tells a story about a networking event she attended where she watched a speaker wave to a section of the audience, who, in turn, waved back at her. The story behind the story is that each of these people had been mentored or hugely impacted by this person. They were trophies of success and testimonies to the success of her brand. Networking IS relationship-building. What we all should want is to have that group of people who “wave back at us.” Kelly’s advice is to think of networking as a long-term play as a way of being there for people. Along with that, you must keep one foot in the past with the relationships you’ve established, while stepping forward with the other foot into the future, to keep up with new tools and ever-changing technological advances.

The Key to Networking

The key to networking? Don’t be a jerk or a weirdo! Be authentic, genuine, and decent. Seek always to speak something that’s of value to the other person, and talk to each person the same way you want to be approached. When dealing with a rude person, remember that person may have had a bad day. Take the high road, have empathy, and remember that you can only control yourself.

What Kelly Wants You to Take Away From Her Book

“Know that you can do it, too!” You can accomplish things when you see a bigger vision of yourself and realize that an unattainable goal is actually attainable. Engage and lend your know-how to others. Ask yourself what you want to be known for, and visualize how others view your success.

Networking is shmoozy, self-serving, and exploits a power imbalance. Some people think networking is when someone is in a position of need, and someone else is in the position to meet that need. Kelly shares how today’s view of networking is very different than it was 30 years ago, though some continue to view it as being an “icky” thing. You can’t look at things solely based on who is in the power position, because you may overlook the very person who could be your next big connection.

Listen to the podcast and read the full NextFem post. 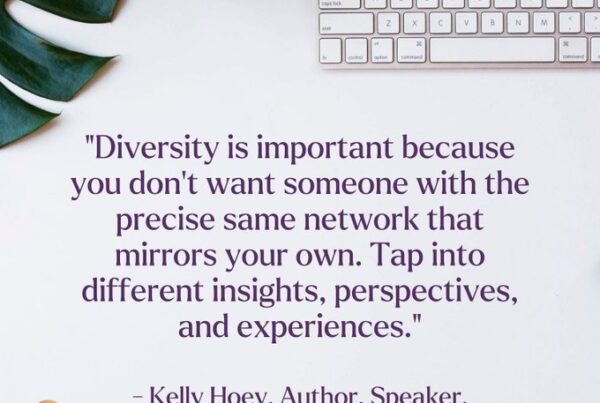